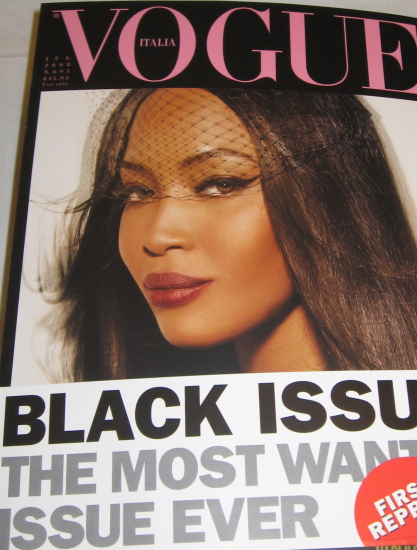 The hot item that most women are hunting for is the July 2008 issue of Vogue Italia: A Black Issue.

The famous glossy features black models at a time when the high fashion industry has ignored them in favor of waif-like models of European descent. A month after its release the Vogue Italia, which generally sells for from $15 to $20—is being sold on eBay for $40.

The issue sold out in the U.S. almost immediately after its release, prompting Cond'e Nast to print 40,000 more copies, sending the message that minorities have spending power, and should be represented equally.

Please know that in my work and creativity, I will portray all women of every color,

for we represent unique beauty by every hue of the rainbow.